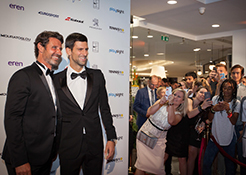 The countdown to the tournament is on its way! We nearly have 300 players from 52 countries! Among them are new countries such as Oman, Australia, Malta, Kuwait, Estonia and India. Excited as we are to go there? Watch and listen to Novak Djokovic what he had to say during the opening of the renovated tennis academy of Mourtatoglou! Interview Djokovic